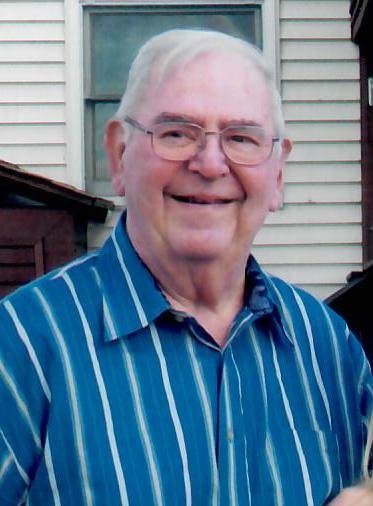 Charles G. Searfoss Jr., 87, of Edison (Charlie), passed away on Thursday, August 15, 2019 at The Chelsea Senior Living in Warren, NJ. Born in Newark, NJ to Charles Sr. and Anna (Wagner) Searfoss, Charles resided most of his life in Edison.

Charlie graduated from Belleville High School in 1950 and was one of the first in the school to receive an athletic scholarship, where he went on to play football for the University of Delaware Blue Hens. After two years of college, Charlie joined the military, serving for the U.S. Army, 11th Airborne Division. He explained that he volunteered for Airborne (when few others would) because of the extra ‘jump’ pay that he would receive. He sent that money home each month to save, which he later used to buy an engagement ring for fiancé, turned wife, Adelaide (Adele) Koster.

After his service, Charlie sold insurance for Allstate.  He then changed careers to become a Health Official for the Township of Edison and finished his college education attending night school at Thomas Edison State University, earning his Bachelor’s degree. Before retirement, he advanced to the position of Senior Health Official for Montgomery Township and completed his career as the Director of Health for all of Somerset County.

Charlie was an active member of the Edison community, having served as a local Councilman. Charlie was also instrumental in maturing the Edison Falcons Pop Warner Football league, acting as both Head Coach and President during the 10+ years of his active participation throughout the 1970s-1980s. Many who played for Coach Searfoss remember to this day his tough but fair style – learning from him as young boys accountability and commitment-to-team; values that they carried with them well into adulthood.

Charlie was a member of the Edison Elks and  is a lifetime member of the Loyal Order of the Moose, Edison Lodge, joining in 1960 and serving as its Governor in 1967-1968.

You can’t speak of Charlie without, in the same sentence, saying New York Giants. He was a season-ticket holder since 1957 – following the team from playing in the Polo Grounds through the present MetLife stadium. A highlight for Charlie was when at a home game in 1999, his name flashed on the jumbo-tron as he was presented with a plaque for being one of the longest season-ticket holders in the history of the Giants organization. 3-2-1: GO GIANTS!

Charlie will be dearly missed by all who knew him throughout the many aspects/decades of his life.

Charles is predeceased by both his parents, and his cousin Evelyn Krenkel. He is survived by his loving wife, Adele (Koster) Searfoss; son, Steven and wife Sandra (Parkhurst) of Flemington; daughter, Dianne (Searfoss) Morin and husband Mike of Gillette; and his grandchildren, Kyle, Erica, Blake and Michael.

Relatives and friends are invited to visit on Wednesday, August 21, 2019 from 4-8 p.m. at Boylan Funeral Home, 10 Wooding Avenue, Edison.  A prayer service and Military Honors will begin on Wednesday at 7 p.m. at the Funeral Home. Cremation will be private.

In lieu of flowers, donations can be made to Pop Warner Little Scholars by visiting www.popwarner.com.