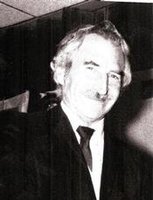 William C. Brinker, 83, died on Thursday, January 9, 2014, at his home in New Brunswick with his family by his side. William was born and raised in New Brunswick, New Jersey, by his loving parents Emil and Mary Brinker. William was proud of his Native American background on his mother's side. He was a well known electrician in the area and was an excellent and devoted employee of Public Service Electric and Gas Company for many years, stationed at the New Brunswick Division. He retired with Great Honor from PSE&G on April 16, 1988, after 38 years and nine months of service with the Company. William was always interested in anything pertaining railroads, trains, etc. He was a Fraternal Order Member of the Improved Order of Red Men and of the Eagles. William will be sadly missed by his Family and Friends. William is survived by his loving wife of 55 years, Gloria Eisner Brinker. He was predeceased by his brother, 2nd Lt. Francis Brinker, U.S. Air Force. Funeral services will be held on Wednesday, January 15th at the Boylan Funeral Home, 188 Easton Avenue in New Brunswick, followed by burial in St. Peter's Cemetery in New Brunswick. Relatives and friends may call at the Funeral Home on Tuesday, January 14th, from 6:00 to 8:00 p.m.