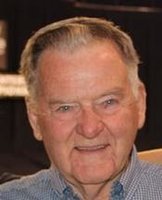 Gerard F Lynch of Edison died Friday November 29, 2013, at St Peter's University Hospital in New Brunswick. He was 76 years old. Born in Jersey City, he resided in Edison for the past 41 years. Gerard was a proud member of the US Marine Corps from 1954 to 1961. He retired from Elizabethtown Water Company in 1999 after more than 35 years of service. He was an active and devoted member of St Theresa's parish where he was a lector as well as a member of the choir. He was predeceased in death by his wife Kathleen M. (Ruddy) Lynch who was his greatest love and best friend for 48 years; his father John Lynch; his mother Margaret (King) Morton and his grandsons Kevin Patrick and Bradley Gerard Rittman. Gerard is survived by his children, Patricia Rittman and her husband Roy of Lebanon Twp; Karen Blackford and her husband Paul of South Plainfield; Dennis Lynch and his partner Mandy Weaver of Portland, Ore; Maureen Halloran and her partner Roseanne Phillips of South Plainfield; Michael Lynch and his wife Carol Anne of New Brunswick; and his former son-in-law Frank Halloran and his wife Catherine of Westfield; his grandchildren Elizabeth and Brandon Blackford; Brian Rittman; Morgan Halloran; McKenna Lynch; and TJ and Liam Halloran; his brother John Lynch and his wife Bernadette of Whitehouse; his brother William Morton and his wife Rose of Barnegat; his sisters Margaret Straube and her husband Harold of Hawley, PA; Katherine Ruddy of Barnegat; Therese Lynch of Barnegat; his in-laws Eileen Shand, Pat and Bill Steiner, Tom and Martha Ruddy and Judy Ruddy; as well as many nieces and nephews. Gerard loved to just hook up his trailer and go. He spent the past few years traveling across the country. He was a very strong, selfless man who took great joy in spending time with his family, his friends, his church, and giving to others. He will be greatly missed. A Mass of Christian Burial will take place at 11:00 am on Wednesday December 4th at St. Theresa's R.C. Church in Edison followed by interment at Van Liew Cemetery in North Brunswick. Family and friends may pay their respects at the Boylan Funeral Home 10 Wooding Ave. Edison on Tuesday December 3rd from 2-4 pm and 7-9 pm. In lieu of flowers, the family requests that donations be sent to Marine Toys for Tots, at Gift Processing Administration, 18251 Quantico Gateway Drive, Triangle, VA 22172 (www.toysfortots.org)